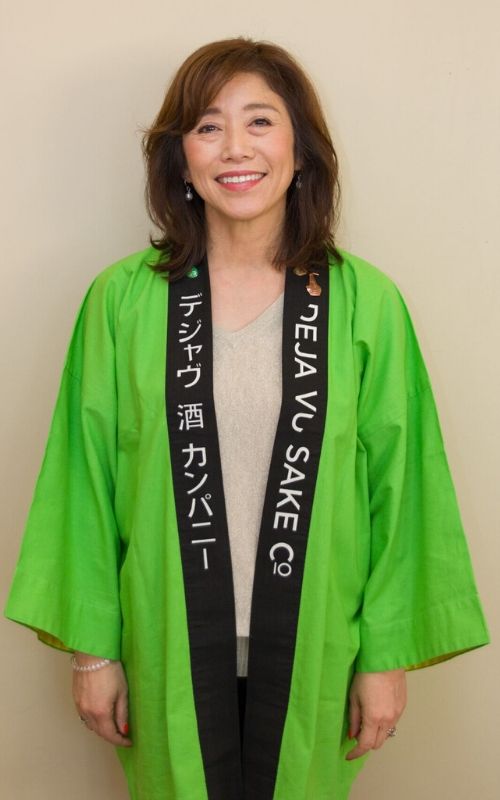 Yukino Ochiai is a passionate certified Sake specialist. Born in Nagoya in Japan, Yukino grew up with a family who loved Japanese Sake and considered it as family tradition.

In 1987, Yukino moved to Sydney with her family and began her career in the wine industry.  For over ten years she worked in sales and marketing for a number of premium Australian wine brands including Penfolds, Rosemount Estate, Wynn’s Coonawarra, Lindemans etc.

Having been exposed to premium Japanese Sake throughout her life, Yukino was determined to bring high quality Sake into the Australian market, and in July 2012 Yukino and her husband Andrew Cameron and business partner, brought this dream to life, founding Deja vu Sake Company.

When establishing the company and its portfolio, Yukino and Andrew visited a number of Sake breweries throughout Japan, where they gained invaluable knowledge about Sake, working with the owners of these breweries to develop a unique plan to introduce their brands to the Australian market.  As a result, Deja vu Sake Co. built a portfolio of five of Japan’s oldest, most premium and established Sake brands; Amanoto, Dewazakura, Houraisen, Tengumai and Yoshinogawa.  In 2018, the company expanded their Sake portfolio with premium brands Tsukinokatsura, Fukuju, Kenbishi Kunizakari and Enter.sake.  Deja vu Sake Co have also added to their portfolio Japanese Whisky, Shochu, Liqueur, Wine and Beer. Two years ago Deja vu Sake Co also started selling into the New Zealand market.

Since launching the company, Yukino has build a strong profile for their brands in Australia, educating Australian consumers about Sake, its versatility and ability to be matched with a range of cuisines and foods.  She has worked closely with many leading restaurants in Australia to showcase this, challenging the common perception that Sake should only be paired with Japanese food.

In February 2015, Yukino became the first WSET certified Level 3 Japanese Sake educator in Australia, launching Australia’s first WSET Sake course in Sydney later that year.  She now teaches WSET course in Melbourne, Queensland (Nov 2018), and Adelaide (Oct 2018) as well as Sydney.   Since 2016, Yukino is one of a select group of Sake experts from around the world to judge at the IWC Sake Competition.

Awarded the title of Sake Samurai in 2017, the highest honour in the Sake industry. Yukino is only the third Australian to receive this distinction. She is also an educator, Kikisake-shi (Master of Sake) and IWC Sake Judge.

The Samurai title is the highest honour in the sake industry, and only four sake ambassadors were inaugurated alongside Yukino at the 2017 ceremony on Wednesday 27 September at Kyoto’s Matsunoo-taisha shrine.

The award, established in 2005, is given to people who champion the culture and identity of sake in Japan and global markets.

Yukino is the third Australian to receive Samurai distinction, following the appointments of Sydney chef Tetsuya Wakuda in 2007 and sake ambassador Andre Bishop in 2013. At the time of Yukino’s appointment, only 70 people hold a Sake Samurai title worldwide.

Yukino became the 16th woman awarded with Sake Samurai status, in an industry where women are significantly underrepresented. In the Japan Sake Brewers Association, women hold only 30 of the 800 chairs within the Junior Council.

“Lots of women are coming into the industry and they’re doing a fantastic job,” says Yukino. “I’m honoured to be one of them. Regardless of gender, I work in the industry because I love the product and I’m proud to promote the traditions from my home country.”

Within a few short years in business, the company has asserted itself as a leading importer of Japanese sake, as well as other famed Japanese exports including whisky and shochu. Unlike traditional importing channels, approximately 40% of Deja vu’s sales are retail-driven rather than incurred through traditional Japanese restaurant trade.

“Yukino is generating huge amounts of enthusiasm in the Australian market and there is a growing buzz around sake in Australasia thanks to her tireless work and energy,” says Sam Harrop MW and New Zealand’s first awarded Sake Samurai. “She has taken sake to the mainstream in one of the most influential and opinionated wine markets in
the world.”

In addition to Deja vu’s work in the promotion of sake in the Australian market, Yukino has become the first Wine and Spirit Education Trust (WSET) certified sake educator in Australia. In 2016 Yukino was one of 50 sake experts from around the world, and one of only two from Australia, to be asked to judge at the 10th annual International Wine Challenge Sake Competition held in Japan.

“Our dream at Deja vu is to make sake approachable to everyone,” says Yukino. “I want Australians to be able to drink sake outside of Japanese restaurants, like at home with a slice of pizza.”