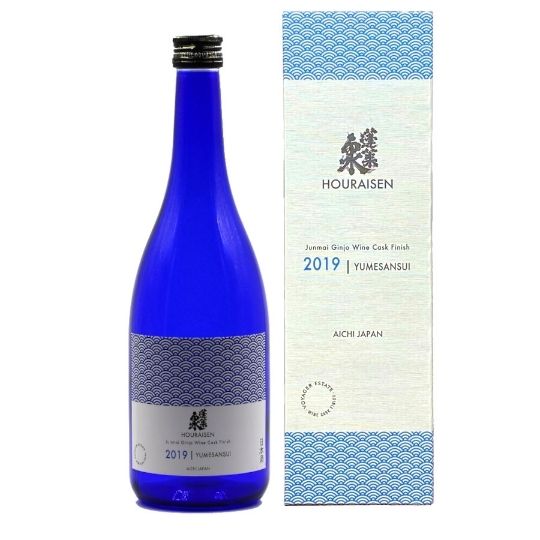 This Sake is a result of the collaboration between Houraisen Brewery and Voyager Estate Winery, WA. The 225 litre French oak wine cask sourced from Voyager Estate, one of Margaret Rivers finest wineries, was previously used to age their flagship 2019 ‘MJW’ Margaret River Chardonnay. The cask used is a 2019 production barrel, using timber from the centre of France. Seasoned for three years before manufacture, it features a light long toast level specifically used for their Clone 95 Chardonnay fruit from Block 6 (part of the MJW blend).

With only 300 bottles produced, it aims to demonstrate the harmony between the Sake and the Wine world.

Expertise and Tradition
Established in 1864, Houraisen is a 7th generation family-owned business in the Prefecture of Aichi about halfway between Tokyo and Osaka. Whilst over 150 years old, Houraisen is now considered one of the most modern and innovative Sake producers in Japan. The average polishing ratio across all the Sake they produce is 50% (Daiginjo level).

Origins
Houraisen owns approximately 29 hectares of rice paddocks, and grow rice suited to the region. Over the past 20 years, Houraisen have developed a strain of rice most suited to their cold mountainous terrain – Yumesansui. Sake made with this rice is refined and produces an elegant style of Sake which is high in Umami.

The brewery and water source are located in the mountains at around 500 metres above sea level, so the climate is cool at night. The water source available to Houraisen is some of the softest water in Japan, as it has no magnesium or calcium, which means the Sake they produce has a very soft texture.

The Sake making process takes several months, before it is stored in a stainless tank for further development of flavours and maturation. Houraisen purposely used White Koji mould during the production of this Sake to create crisp acidity and balance with the French oak and its influence. Acidity in the Sake also adds to the complexity.

This Sake went through an extended fermentation process to assist with texture and layers of flavour, to enable it to be able to handle the oak cask influence. Following this extended fermentation, the Sake was then transferred from the stainless steel tanks and aged for 2.5 months in the Voyager Estate French oak cask.

Sake does not normally have a ‘vintage’ attributed to it, however 2019 celebrates the collaboration between wine and sake – to create something very special.

Classic Pairing
This Sake has hints of warm spices on the nose, and the influence of the Chardonnay cask lends a fruitiness. Full-bodied with a velvety texture and refreshing acidity and sweetness from the rice, it can be enjoyed with rich white meat dishes, cream sauce pasta, grilled tuna or salmon with miso or soy sauce flavour. It is also delicious with your favourite cheese. Kampai!